Tensions began in Al Aqsa Mosque on Friday ,14 july 2017  when three Arab citizens of Israel stormed the central area of Jerusalem known to Jews as the Temple Mount and to Muslims as Haram al-Sharif  killing two Israeli police officers. The assailants were shot on site.

In reaction to the terror attack, Israeli Prime Minister Benjamin Netanyahu’s government imposed unusually strict security measures on access to the Temple Mount and the area around the al-Aqsa Mosque.

Though Palestinian Prime Minister Mahmoud Abbas was quick to condemn the murder of the two Israeli police officers, Israeli security forces acted quickly to shut down all access to the Temple Mount, imposing a two-day shutdown of all access to the holy site.When it reopened on Sunday, Palestinian men under the age of 50 were barred from prayers at the plaza surrounding the al-Aqsa Mosque. And then Israeli security officials went further,installing metal detectors at the perimeter.

Leaders advised Muslim worshipers not to go through the metal detectors, but to pray outside of them instead, creating dramatic, massive scenes Friday of thousands of men bowed in prayer in the street.

In a late night announcement in the early hours of Tuesday, Israel said it would replace the metal detectors with other security arrangements based on “advanced technology”.

Outside the compound on Tuesday evening, worshippers insisted they would not enter the mosque.

A brave lady arguing with  Israeli forces-“This is My Aqsa .We won’t let you control it ”

“Everyone has come here to protest,” said Fadel Abu Ramouz, 48. “We don’t want Israeli cameras or any other measures and will stay outside the mosque until they do.”

Why Muslims did not want to enter through the metal detectors

Watch a Documentary Video on the History of Masjid Al Aqsa

The metal detectors are part of a bigger argument over the so-called “status quo” at the holy site. While al-Aqsa is sacred to Muslims, it is also holy to Jews who refer to the area as the Temple Mount and believe it is the site where Abraham offered to sacrifice his son Isaac to God.

When Israel took control of the area during the 1967 war its government had to decide whether to allow Jewish worship at the site and risk inflaming tensions with Palestinians. Israel opted for a compromise: only Muslims would be allowed to pray at the site but Jews could visit at certain times and under certain restrictions.

That “status quo” has more or less held for fifty years but many Palestinians are convinced Israel is trying to take control over al-Aqsa, also known as the Temple Mount. In the metal detectors and other security barriers, they saw just such a sign.

On Thursday morning the Israeli government removed the last of the railings and the waqf, the Islamic authority that administers the mosque, gave the all clear for worshippers to return to the holy site.

All cameras and Metal detectors were removed .People got Permission to Pray inside the Mosque.

And Finally comes the moment of Rejoicing :

Thousands of people poured through the gates of the mosque, chanting in victory, but clashes soon broke out between Israeli riot police and parts of the crowd. (Ref) 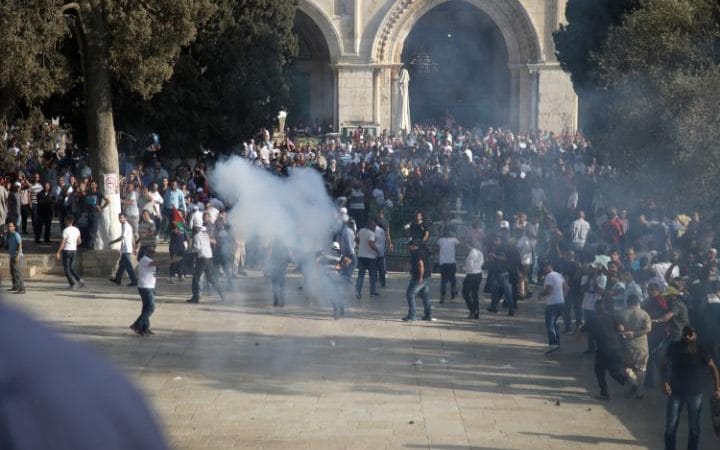 The tensions still exist [despite metal detectors gone] but the condition is far better . We Pray to Allah Swt to bring Peace in Palestine. Ameen.

The Status of Owais Qarni-Islamic reflection 02

Hajj Ride 2017 : First Ever Cycle Ride for Charity from London to Madina .