Rio Olympics 2016: Muslim Olympic athletes depicting that faith is not incidental, but central to their excellence in sport.

On Aug. 13, Somali British long distance runner Mo Farah sought to claim back-to-back gold medals in the 10,000-meter run. In the middle of the race, the favorite locked his legs with another runner and fell on the track. He bounced right back up, strategically wove his way past the pack and claimed gold.

After he crossed the finish line, Farah fell on the track again—this time to pray. He bowed his head before a stadium of adoring spectators. That performance was just as dramatic as racing past Kenya’s Paul Kipngetich Tanui to win this third gold medal.

Farah’s prayer can help counter the damaging stereotypes of Muslims held by many around the world. For Farah, and scores of Muslim athletes, faith is not incidental, but central to their excellence in sport. “I normally pray before a race,” Farah said. “I read du’aa [Islamic prayer or invocations] think about how hard I’ve worked and just go for it.”

A young woman in a head scarf can often conjure up images of frailty and disempowerment. But Egyptian weightlifter Sara Ahmed defies all stereotypes. She can out-lift most women in the world and has the kind of physical power few possess.

Donning all black with a red headscarf, the colors of her nation, the diminutive Ahmed lifted a combined weight of 255kg (562lbs) to claim the bronze medal in the 69kg weight class. The feat, given her nationality and ethnicity, was unprecedented. Ahmed became an instant icon in her native Egypt, becoming the first female medalist in the nation’s 104-year history in Olympics’ competition and the first Arab woman to win an Olympic medal in weightlifting.

As she bowed her head to receive her medal, Ahmed represented world-class power, strength and Muslim womanhood, disrupting tropes that have enabled headscarf bans in France and trite oppression narratives in America and elsewhere.

U.S. fencer Ibtihaj Muhammad made history, then won in opening round

Merely by stepping onto the strip at Carioca Arena 3, fencer Ibtihaj Muhammad made a bit of Olympic history.

The 30-year-old New Jersey native became the first American athlete to compete at the Games in a hijab, the traditional headscarf worn by Muslim women.

Ibtihaj Muhammad was a star in the Muslim American community long before she stepped onto the global scene. But her story was about far more than being “the first U.S. Olympian to wear a hijab during competition.” She championed a cause long-ignored by non-Muslims and Muslims alike: the distinct experience of African American Muslims and the distinct perils often created by intersecting racism and Islamophobia.

In response to Donald Trump’s proposed ban Muslim immigrants to the U.S., Muhammad responded: “I’m African American. I don’t have another home to go to. My family was born here. I was born here. I’ve grown up in [New] Jersey. All my family’s from Jersey. It’s like, well, where do we go?”

She claimed bronze. But her story, and the ignored narratives her Olympic excellence made possible, is golden.

Above excrept taken from article that first appeared in :Time.com 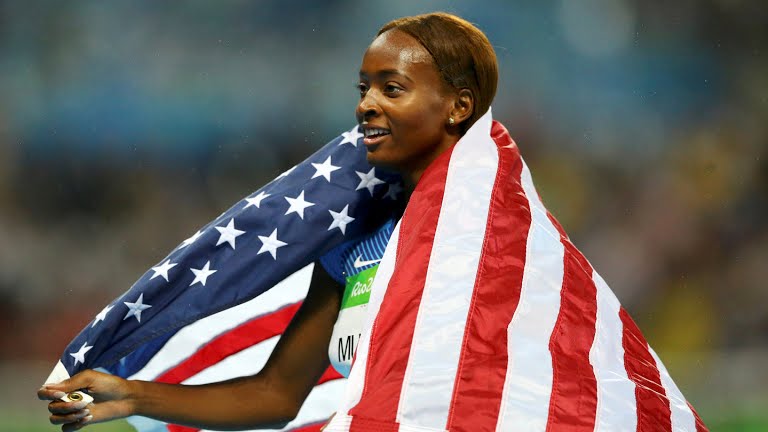 Ahmad Abughaush (Arabic: أحمد أبو غوش; born 1 February 1996) is a Jordanian taekwondo athlete.He competed at the 2016 Summer Olympics in Rio de Janeiro, in the men’s 68 kg, where he won the gold medal. This was Jordan’s first ever Olympic medal.

Shooter Fehaid Al-Deehani made history by becoming the first person to win an Olympic gold medal as an independent athlete.

Faheid al Deehani was unable to represent his native Kuwait at Rio 2016 after its Olympic body was suspended by the International Olympic Committee (IOC).Al-Deehani, 49, beat Italy’s Marco Innocenti 26-24 in the final of the double trap shooting event.

A List of Muslim Olympians to watch in Rio Olympics 2016: