In Response to Migrant Crisis and People Signing Petition to stop Immigration,A Reflection from the Story of the Chritian King as to Why he Protected the Muslim Refugees

Contents hide
1 In Response to Migrant Crisis and People Signing Petition to stop Immigration,A Reflection from the Story of the Chritian King as to Why he Protected the Muslim Refugees
2 Signing Petitions to let People Die
3 People granted asylum is low
4 A Real story from Past-Why did the Abyssinian Emperor chose to break ties with Allies than return Muslim Refugee

Refugees are People who are forced to leave their land in fear of Prosecution and Conflict.Such People can seek Protection under international protection under the 1951 Refugee Convention on the Status of Refugees;

The International Organization for Migration (IOM) estimates that more than 464,000 migrants have crossed into Europe by sea for the first nine months of 2015. Syrians fleeing their country’s four-and-a-half-year-old civil war made up the largest group (39 percent). Afghans looking to escape the ongoing war with Taliban rebels (11 percent), and Eritreans fleeing forced labor (7 percent) made up the second and third largest groups of migrants, respectively. Deteriorating security and grinding poverty in Iraq, Nigeria, Pakistan, Somalia, and Sudan have also contributed to the migrant influx.

Immigrants risk their lives to leave war-torn countries such as Syria, Libya, Iraq and Afghanistan, journeying to safer European countries.

According to the IOM, more than 2,800 migrants are reported to have died trying to make the crossing this year – altogether, 3,406 people have died in the Mediterranean in 2015.

But  sadly they aren’t being welcomed with open arms or receiving the offer of a helping hand.Infact recently,More than 40,000 people have signed UK Parliament petition asking the government to stop all immigration to the UK “immediately”.

Although huge numbers have been applying for asylum, the number of people being given asylum is far lower.

In 2014, EU countries offered asylum to 184,665 refugees. In the same year, more than 570,000 migrants applied for asylum – although applying for asylum can be a lengthy procedure so many of those given refugee status may have applied in previous years.

In the same period, 6,788 asylum seekers and their dependents were removed or departed voluntarily from the UK. 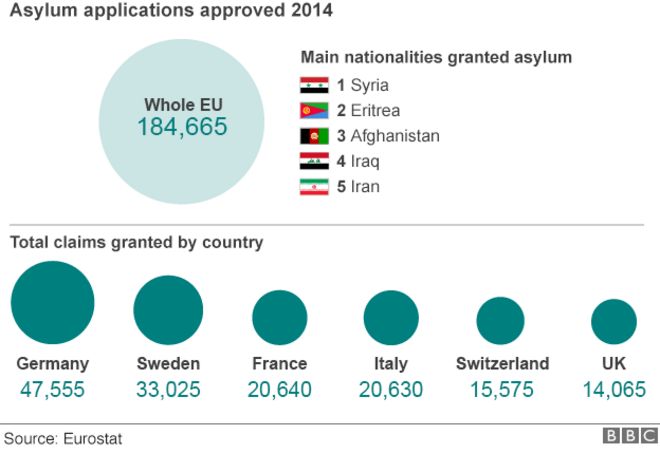 Today the People of Britain are Signing The petition, which says that many immigrants are “trying to change UK into a Muslim country”.This Ptition  had nearly 45,000 signatures at time of writing, with around 1,300 people signing each hour.

But If they Knew the Story Of the Abyssinian King and took Lessons from him,they wouldn’t have fallen to the trap of Ignorance.

A True Christian is considerate and he stands for Humanity.Please Make this Message reach People by Sharing this Remnder. May Allah help the Refugees.