Places to visit in madina munawara, Ziyarat Places in Madina and Virtue of Madina Munawwara

Have You been to Madina Munawwara? It is mesmerising. Right? Here I have compiled a comprehensive list of places to visit in Madina munawara and the Ziyarat places in Madina which can be of great help

“For the believer, Madina is the best place. If only they could understand it’s virtue fully, they would never leave it, and whoever departs from Madina, having become disenchanted with it, Allah will send someone better to replace him. And whoever bears patiently the ordeals of Madina, for him shall I be an intercessor(or witness) on the Day of Qiyamah.” [Muslim]

MADINA IS IMMUNE TO DAJJAL “There will be no town which Ad-Dajjal (the anti-Christ) will not enter except Makkah and Madinah, and there will be no entrance (road) but the angels will be standing in rows guarding it against him, and then Madinah will shake with its inhabitants thrice and Allah will expel all the nonbelievers and the hypocrites from it.” [Bukhari]

You May want to Double check your Packing list : The Prophet  (Sallalahu alaihe wa sallam) alighted and said, “This is the home” and inquired as to who owned the land. The land contained a few date trees, graves of polytheists, a resting spot for herds of cattle and was owned by two orphan brothers, Sahl and Suhail. (radi Allahu anhu) The Prophet (peace and blessings of Allah be on him) purchased the land, had the trees cleared and the polytheists graves dug up and levelled

Must visit Places to visit in Madina munawara

The area between the Sacred Chamber and the Pulpit (Mimbar) is known as the Riadhul Jannah i.e. Garden of Paradise. It is presently distinguished by a green carpet and is also referred to as Rawdah.

(b) Ustuwaanah Aisha (may Allah be pleased with her):

The Prophet  (Sallalahu alaihe wa sallam) used to say his prayers here and afterwards moved to the place at Ustuwaanah Hannanah. It is also called the Ustuwaanah Qu’rah. The reason for this is that Aisha (may Allah be pleased with her) reports that the Prophet (peace and blessings of Allah be on him) said: “In this masjid is one such spot that if people knew the true blessed nature thereof, they would flock towards it in such in a manner to pray there they would have to cast such lots .”

People asked her to point out the exact spot which she refused to do. Later on, at the persistence of Abdullah bin Zubair (may Allah be pleased with him) she pointed to this spot. Hence it is called Ustuwaanah Aisha, because the Hadith is reported by her and the exact spot was shown by her. It is a fact that Abu Bakr and Umar (may Allah be pleased with him) very often used to pray here.

So,Whe you go for Ziyarah, try to locate this spot .Unfortunately I do not have much information about the location of this spot because it is inaccessible to ladies. Masjid Bilal is named after a Companion of Muhammad SAW. Bilal was a former Abyssinian slave who accepted Islam. He was freed by Abu Bakar r.a. who purchased Bilal while Bilal was under torture by his master for revealing that he was a Muslim. He is well known for being the first Muslim to call the Adhan. This was Home of Hazrat Abu Bakar Siddique which was later converted to a Masjid by Saudi Authroirities. It is the Well of Shifa in Madina E Munawwara. This well had poisonous water it was converted into Well of Shifa after Mohammed  (Sallalahu alaihe wa sallam)  Spitted into the well (loaab e dahen) During the battle of Badr. Its Water is still Sweet. There was a time in Madina when it faced huge shortage of water, due to lack of rainfall. All the wells were dried and barren. Only one well owned by a Jew had water in it. The Jew owner was very biased and sold water on very high prices to the Muslims, and offered absolutely free water to the Jews.

When this news reached the Prophet صلى الله عليه وآله وسلم he asked all the Muslims, “Anyone who wants a house in JANNAT should buy that well for the Muslims.”

This saying of the Prophet صلى الله عليه وآله وسلم reached Hazrat Usman bin Affan رضي الله عنه, that only buying a well can make house in Jannat, he instantly decided to buy that well. He went to that Jew and asked him his price for that well but he said to sell only half of it. Hazrat Usman رضي الله عنه bought half of the well and made it Waqf for the Muslims i.e. they could have as much free water as they wanted.

Now no one purchased water from that Jew, so he asked Hazrat Usman to buy the other half as well which he did happily. Since then this well is known as Bir Uthman.

10)Site of Battle of Trench (Khandaq) The Battle of Khandaq took place during the time of Prophet  (Sallalahu alaihe wa sallam).It is also called as battle of Confederates and Surah Al Ahzab was revealed  to denote the confederacy of non-believers and Jews against Islam.Here there are Seven Masjids . A Trench was dug on the idea of Salman Al Farsi (Raliallahu Anhu). Prophet (Peace be upon him) 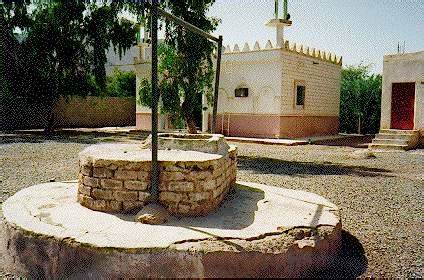 “Bir-e-Ali” or the Well of Ali [a]. It is said that When returning from an expedition, the army of Ali radi allahu anhu once ran out of water. He dug this well from which water continues to flow even today. This place is not too far from Masjid Shajarah (Miqat)

It is praiseworthy to ask Allah Ta’ala for a death in the city of His Final Messenger (Allah bless him and grant him peace), the illuminated Madinah. There is also a great significance in being buried in the al-Baqi’ graveyard. The Prophet (peace and blessings of Allah be on him) said, “On the day of Qiyamah my grave shall be opened first and I shall step forth. Then shall Abu Bakr (may Allah be pleased with him) step forth and then Umar (may Allah be pleased with him). Then shall I proceed to Baqi and take all its inmates with me. Then shall we await the inmates of the graveyard of Makkah, who shall meet me halfway between Makkah and Madinah.”[Tirmidhi]

This is Masjid Qiblatain (Mosque of the Two Qiblas). It is historically important to Muslims as this is where in Rajjab 2 AH the revelation of the Quran came to change the direction of the Qibla from Bait-al-Maqdis in Jerusalem to the Ka’bah in Makkah. THE START OF HOSTILITY BETWEEN JEWS AND MUSLIM

Last but not the least the thrill of visiting Madina is incomplete without visiting the wadi-e-jinn.It is around 30-40 km from Madina. here your car will run at 120kmph even when your engine is switched off and when  water is poured in the slope,it flows against the slope.

Well there are scientific theories behind this place but if you wan’t to amaze someone go to this place .It is a thrill to be there. If You like this article,Start a discussion on this topic or leave us a feedback in the comment box below.

Diary of a pilgrim:Hajj Diary 2015