The Story of Zulaikha and Yusuf

The Story of Zulaikha and Yusuf(pbuh) is an amazing tale of attempted seduction. Zulaikha is  mentioned as the Quran as the  “wife of Aziz” . The story is also mentioned in jew and christian traditions where she is known as the Potipher’s Wife. Prophet Yusuf(pbuh) was the Prophet of Allah and the son of Prophet Yaqub . There is a Whole Surah named after him-Surah Yusuf(Chapter 12,Quran) .

Yusuf (peace be upon him) lived for years in the house of Zulaikha, a woman of beauty, power and influence. Day in and day out, Zulaikha was exposed to his physical allure, a composition so stunning that the Messenger Muhammad [peace be upon him and his family] said “Yusuf AS has been given half of all beauty” [Muslim].  Zulaikha suppressed her desire for Yusuf AS until she could no longer control it.  She waited until her husband left the home. Alone with Yusuf AS, she locked the doors and called him to fulfill her desire.

[After locking the doors] Zulekha attempts to seduce Yusuf. She beautifies herself in the most attractive of ways and says

“Oh Yusuf! You have the most handsome of faces.”  Yusuf, sensing what Zulekha is attempting to do, replies, “This is how my Lord fashioned me in the womb.”

“Oh Yusuf!”she says, “You have the finest of hair!”  “It will be the first portion of me to wither in my grave,” he replies.

Undeterred, Zulaikha presses on. “Oh Yusuf! Your eyes are so beautiful.”  “I use them to look at my Lord,” he retorts.

“Yusuf, raise your sight and gaze at my face,” she responds.  “I fear [if I do so] that I will be resurrected blind in the afterlife,” Yusuf answers.

She tries to press herself close to Yusuf, but he moves away. “I come close to you, yet you distance yourself from me?” she asks. “ I desire, by that, the closeness of my Lord,” he says.

“Yusuf, I have prepared my bed for you so enter under its sheets with me,” she says.  Yusuf replies, “Your sheets will not shield me from my Lord.”

“Yusuf, I have prepared the finest of silk covers, so I order you to fulfill my desires!” she exclaims.  “If I do so,” he says, “My portion of paradise will be lost.”

Story of Zulaikha and yusuf AS in Quran

Zulaikha’s  attempt to seduce him was fruitless, and his desire to remind her of Allah was falling on a deaf heart. Allah recounts the story Himself:

Sahih International: And she, in whose house he was, sought to seduce him. She closed the doors and said, “Come, you.” He said, “[I seek] the refuge of Allah. Indeed, he is my master, who has made good my residence. Indeed, wrongdoers will not succeed.”(12:23)

Sahih International: And she certainly determined [to seduce] him, and he would have inclined to her had he not seen the proof of his Lord. And thus [it was] that We should avert from him evil and immorality. Indeed, he was of Our chosen servants.(12:24)

Sahih International: And they both raced to the door, and she tore his shirt from the back, and they found her husband at the door. She said, “What is the recompense of one who intended evil for your wife but that he be imprisoned or a painful punishment?”(12:25)

Sahih International: [Joseph] said, “It was she who sought to seduce me.” And a witness from her family testified. “If his shirt is torn from the front, then she has told the truth, and he is of the liars.

Sahih International:But if his shirt is torn from the back, then she has lied, and he is of the truthful.”

Sahih International: So when her husband saw his shirt torn from the back, he said, “Indeed, it is of the women’s plan. Indeed, your plan is great.

Sahih International: O Joseph, ignore this. And, [O woman], ask forgiveness for your sin. Indeed, you were of the sinful.”

Sahih International: And women in the city said, “The wife of al-‘Azeez is seeking to seduce her slave boy; he has impassioned her with love. Indeed, we see her [to be] in clear error.”

Sahih International: So when she heard of their scheming, she sent for them and prepared for them a banquet and gave each one of them a knife and said [to Joseph], “Come out before them.” And when they saw him, they greatly admired him and cut their hands and said, “Perfect is Allah ! This is not a man; this is none but a noble angel.”

Sahih International: She said, “That is the one about whom you blamed me. And I certainly sought to seduce him, but he firmly refused; and if he will not do what I order him, he will surely be imprisoned and will be of those debased.”

Sahih International: He said, “My Lord, prison is more to my liking than that to which they invite me. And if You do not avert from me their plan, I might incline toward them and [thus] be of the ignorant.”

Yusuf [alayhi as’salam] was a prophet of Allah who was in control of his desires. Zulaikha, like you and I, was not. She allowed her desires to overcome her love for Allah. She found herself to be living with the object of her want, Yusuf (alayhi as’salam). Zulaikha eventually diagnoses the root cause of her disease when she says:

The Messengers of Allah [Peace and blessings be upon them] taught us the cognizance of our souls, and gave us the tools to control our caprice, while reminding us that success can only come by the mercy of Allah [May He be glorified]. The story of Yusuf and Zulaikha explores the nature of desire, temptation, and envy that occupies space in all of our souls and leads many of us astray.

Read Other Stories from Quran: 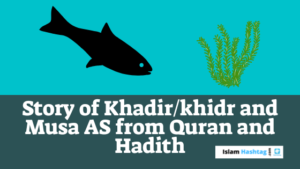 Story of Khadir/khidr from Quran and Hadith

You must have heard about Khadir AS. Earlier we used to read his name as Khidr but our ustadh sahab ...
Read More 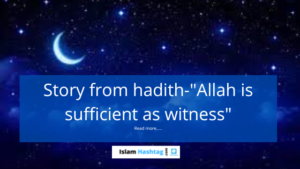 Narrated Abu Huraira: The Prophet (ﷺ) said, "An Israeli man asked another Israeli to lend him one thousand Dinars. The ...
Read More Have you heard this story of shaitan and Abu Huraira radi allahu anhu? There is a great lesson in this ...
Read More Do you know who was the sahabi at whose death the throne of Allah shook? It was Sa’d bin Mu’adh ...
Read More Maalik Bin Dinaar (rahmatullahi alayh) was one of the famous saintsof his time. It is said that in his early ...
Read More Assalamu Alaikum wrwb, Today I would Like to tell you an interesting Story which I came across while studying a ...
Read More Clare's Journey to Islam I was aware of Islam from a very young age as I grew up with children ...
Read More Assalamu Alaikum, I live near Madina . Alhumdulillah I get many chance to visit Madina. One incident that I witnessed ...
Read More